October 22, 2018
The other day, adiyen was discussing a beautiful story from Ramanujacharya's life history with a few kids in a class. The story was about how Sri Vaduga Nambi lay himself on the hot scorching sand of the river Caveri shore. Vaduga nambi then put Ramanuja's tirumeni on himself so that Ramanuja can be safe as he prostrated in front his own acharya, Tirukoshtiyur nambi.

A few days earlier, Tirukoshtiyur nambi hurried to Sri Rangam on the concerns that Ramanujacharya went on a non-stop fasting as there were multiple attempts on his life. The goal of Tirukoshtiyur nambi's visit was to identify a truly trusted and a devoted disciple of Ramanujacharya who can make the prasadam. Luckily, he found one true disciple in Vaduga Nambi, who demonstrated that he did not care for his own discomfort and laid himself online to protect his acharya Ramanuja. As a result, Tirukoshtiyur nambi impressed with Vaduga nambi's devotion to Ramanuja and appointed him to perform all prasadam kainkaryams.

This event from Ramanuja's life history kept me thinking what exactly is acharya kainkaryam? Is it taking care of my acharya's tirumeni? If so, adiyen has rarely performed any acharya kainkaryam. Putting in additional thought as I asked myself an even more fundamental question - Who is a true acharya and what is his tirumeni?

Vedic scriptures lay out 14 qualities that an acharya must possess to be called a true guru. One of the key qualities is that a true acharya is always situated in Emperuman, Lord Sri Ranganatha. If so, then the acharya's tirumeni is really Emperuman. In other words, my acharya's tirumeni is none other than Lord Srimannarayana and taking care of the Lord means to take care the two worlds - Leela and Nithya vibuthis. Leela vibhuthi is the entire visible universe and nithya vibhuthi is the abode of Lord Srimannaryana. 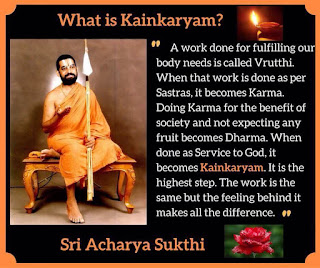 Hence, adiyen concluded that taking care of my acharya's tirumeni is really taking of the Perumal.

Popular posts from this blog

July 16, 2021
Data Centric Infrastructure (DCI) Data is the life line of any organization. Patient info in Healthcare, call recordings in telco, account info in finance, etc., you get it, data is the secret sauce of the companies in every sector.  Industry has moved from hardware centric to network to application and now to Data centric.
Read more

Jai Srimannarayana ! జై  శ్రీ మన్నారాయణ ! This is a life-time opportunity to be part of something bigger than ourselves. 216ft of Sri Ramanuja Swamy is coming up shortly in the beautiful city of Hyderabad, India. Hyderabad and India will soon be identified with the monument and we can all proudly say that we were part of a generation that made the statue happen. Link to the progress that has been made till date : https://www.statueofequality.org/ Options to donate : https://donations.chinnajeeyar.guru/product-category/statue-of-equality/ You can always reach out to your local Jeeyar Education Trust chapter members (jetusa.org) to learn more about the project and be part of it.
Read more